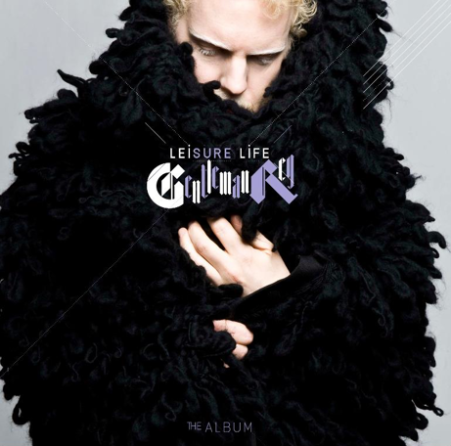 Over the past decade, Gentleman Reg’s career has continually gained impressive momentum on the Canadian music scene. While signed to Three Gut Records between 2002 and 2005, he acquired recognition by lending his music to popular film and television. The more developed “Jet Black” (2009) released through Arts & Crafts, drew new fans to his sassy pop-rock sound. The last three years he’s been busy working with his side project, Light Fires, and collaborating with big name acts such as Broken Social Scene, and Tegan and Sara. The recent release “Liesure Life” (2012) kicks it up a notch from Jet Black; with energy-charged tempos, innovative production, and even more attitude.

The album immediately delivers a delightful pop delicacy, “Waiting Around For Gold”. It kicks off with energetic melodies from the synth that imply a playful tone. Verses drop down in dynamics to allow the charisma of Reg’s voice to be at the forefront. The pre-chorus doesn’t linger too long, it’s the perfect length to conjure a compelling build. The songs energy culminates in the chorus, delivering an infectious anthem-like hook with superb harmonious support. Lyrically, the theme of the album is presented. Reg sings about stumbling through the erratic life of an undiscovered musician, riding the waves of glamourous highs to tragic lows, whilst waiting for success to find him.

Reg’s phonetics divide and emphasize lyrics unlike a standard pop singer. His use of vocabulary is impressive, but sometimes the hook could be strengthened if the syllables fit more rhythmically with the melody. Some of the words are lost in their pronunciation. Not necessarily a bad thing, as his voice is so expressive that the lyrics are more so a medium for him to convey his personality and performance abilities. However, indistinguishable lyrics could be a potential hindrance in appealing to a mainstream audience.

“Too Drunk” is a stand out song on the album for this simple reason: after you’ve heard the hook once, you’ll never forget it. The track begins with a lightly distorted guitar tone, playing minimalistic straight riffs. The band enters halfway through the first verse. This creates dynamic fluctuation, enhancing the build in the song’s natural progression. Reg describes a hazy sexual encounter, with a tone of casual indifference: “Touch my face with love like I don’t care. Slap my face, my love, without a dare.” Driving melodies of the synth are characteristic of the overall sound of the album. They come across as arising from similar inspiration, without being mere recreations of the others.“Too Drunk” repeats as the allure of the chorus, which despite its simplicity, remains listenable due to subtle melodic and instrumental changes.Fun and memorable, the album is packed full of these upbeat hits.

The most noticeable change up in the song type is “Solo Show”. It is slower, stripped down, and feels more raw than the sugary production of the other tracks. Reg’s vocal versatility shines, beginning with a gritty tone, then reaching up the octave. The song has been built to gather more energy, while still having a slow, ballad-like design.

Gentleman Reg has taken it to the next level with Leisure Life. He is ready to be plucked from the Toronto indie scene and delivered to the world stage. A performer through and through, his voice is elegant, haunting, tragic and sexy with effortless delivery. The album’s biggest strength lies in the song construction. Without a miss, each song cultivates contrasting ebb and flow, creating space for forceful climaxes. The most prominent instrument is Reg’s voice itself. He delivers unique inflection, phonetics, rhythms, and tones all dripping in personality. Reg opens his world to you through his music. A glamourous young lifestyle, medicating problems with drugs, alcohol, and messy relationships. Describing life as a roller coaster, where despite glossy thrills of the high life, failure is inevitable. However, success is what is called to mind when talking about Gentleman Reg’s career. With consistent delivery of great music, he’s become an unstoppable force in the music community. Leisure Life is the newest instalment in his musical evolution, and will surely propel him to a new level of recognition.